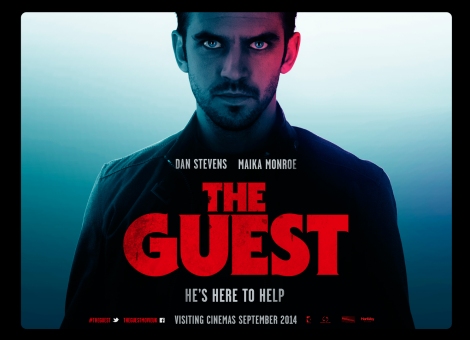 Having scored a surprise hit last year with the excellent home invasion horror You’re Next, director Adam Wingard and screenwriter Simon Bennett have re-teamed to tread a similar path with The Guest. Both play with audience expectations, provoke laughter from surprising and occasionally horrific twists, and have fun playing with the tropes of their respective genres while managing to cement their status as very respectable entries themselves. While You’re Next provided a shot in the arm for horror – by turns funny and frightening, it was a superbly gonzo film and a great time with an audience – the film-makers have clearly upped their game here and, turning their attention from Horror to Thriller, deliver a sublime slice of 80’s-tinged suspense with enough tension, gallows humour, and explosions of shocking violence to keep even the most jaded of viewers engaged. 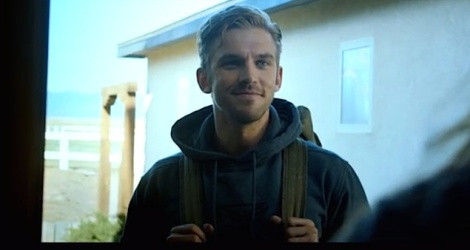 If this stranger turned up at your door, what would you do? (Keep it clean, ladies)

Dan Stevens stars as David, a mysterious stranger who arrives in an anonymous New Mexico town armed only with seemingly good intentions. Landing on the doorstep of the grieving Peterson family, he reveals that he had served in the military with their son Caleb, for whom they are still in mourning, and had promised his fellow soldier to ‘check in’ on his parents and siblings once able to. While there is initial resistance in the household to his unexpected appearance, David gradually begins to win over the whole Peterson clan, who succumb one by one to his easy charm, quiet charisma and winning smile, and the proposed length of his visit stretches from an afternoon to overnight to a few days within the first few hours of his arrival. He seems content to merely plug a hole in the life of each family member; by reminding Mom (Shelley Kelly) of her son and his bravery and kindness, becoming a reassuring drinking buddy for unfulfilled Dad (Leland Orser), and acting as surrogate (badass) big brother for bullied teen Luke (Brendan Meyer), David assimilates himself into this family unit perfectly but for one exception. Wayward eldest daughter Anna (Maika Monroe) is able to ignore her raging hormones for long enough to suspect that something is not quite right with their handsome gentleman visitor… and it’s not very long at all before the audience does, too.

Without going into any spoiler territory that hasn’t been seen in trailers or mentioned elsewhere, it’s fair to say that she (and we) are correct in this suspicion, although the viewer is made keenly aware long before almost all of the central characters. They don’t see the speed at which David’s smile can turn chillingly cold, or his steely eyes in close-up as he stares at the nothing in the distance, and we watch as they fall under his spell in spite of knowing nothing about who – or what, for that matter – he really is. Even when Maika calls a military base to check his story and receives information that throws everything about David into question, her warnings fall on deaf ears, so taken are her family with their wonderful houseguest. But as the consequences of David’s peripheral actions mount – some broken bones here, a seduced teen there, and a steadily rising corpse-count – it’s only a matter of time before Anna’s worst fears are confirmed, and the CID – led by Major Richard Carver (genre favourite Lance Reddick) – roll into town in pursuit of their rogue ‘weapon’.

David’s version of the ‘mic-drop’ was about to get very, very messy

There are various elements at play here, but rather than resulting in a messy stylistic mish-mash they work together beautifully. At once a suspense thriller, a mystery, and a very black comedy before descending almost into a slasher-type murder rampage, Wingard and Bennett apply a deft and knowing touch to this blend of genres that keep things delightfully giddy while reassuring the audience that they are 100% in on the joke. The soundtrack is filled with excellent retro-electronica, sometimes dark and sometimes dream-like, and is an extension of this; by consciously homaging scores from the early films of Cameron, Carpenter and their compatriots, it highlights to the viewer exactly what canon this fantastic film belongs in. The Guest is a demented, ballsy, kick-ass 80’s movie to its very core. It just happens to have been released in 2014.

While the cast is uniformly excellent, it is of course Dan Stevens’ show – and he delivers a revelatory turn here. Known to most for his work on dour drama Downton Abbey, he takes the central role of David and absolutely nails it to the ceiling, exuding an All-American, ‘Aww-Shucks’ charm (complete with perfect accent) that only hints at the psychopath boiling away underneath. He’s completely magnetic and carries the film with ease, and when violence erupts there’s a clinical, emotionless detachment to David that makes him all the more frightening. It’s a star-making turn, no doubt, and I hope this won’t be his only experiment with material outside of his typecast. 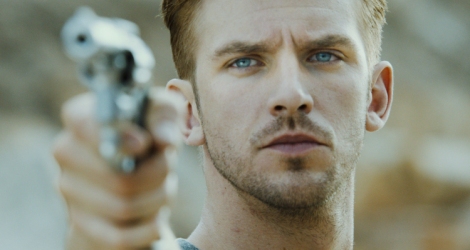 Do You Feel Lucky, etc.

While some viewers might dismiss this The Guest as just too oddball – those not savvy to the film-makers’ intentions may find it jarring, weird or corny when it is, only knowingly so – there’s a superb little film here for the rest of us to enjoy. It’s slick, it’s bloody, and it’s just a little silly – but in exactly the right ways.

This movie is an absolute riot. See it.

The Guest is released on DVD/Blu-Ray on December 29th