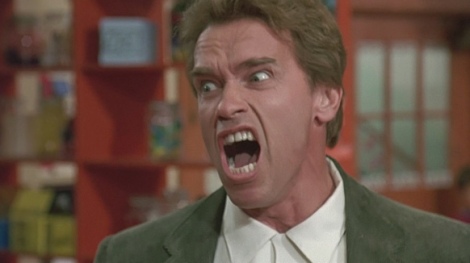 Everybody’s favourite slab of Austrian Oak continues his descent into utter madness – and I love it.

Here’s a four minute clip of Arnold Schwarzenegger on The Tonight Show with Jimmy Fallon*, doing a fake QVC TV spot and continuing his streak of sending himself up, dropping his big catchphrases (one of Predator‘s most oft-repeated lines gets its due here) and generally acting utterly deranged. Much like his recent appearances – the ‘Best Night Ever’ Pepsi commercial, or hassling people in a gym wearing a disguise, or crushing shit with his tank, or his entire performance in Stallone‘s Escape Plan – it’s very silly, and it’s totally awesome.

*By the way, Arnie was on The Tonight Show to promote his upcoming movie Sabotage – which is co-written and directed by David Ayer. He’s the guy behind Training Day and, recently, the stunning End of Watch, and this genuinely looks like one marked for great things and with a perception-altering performance from the ex-governator. Watch the trailer here: