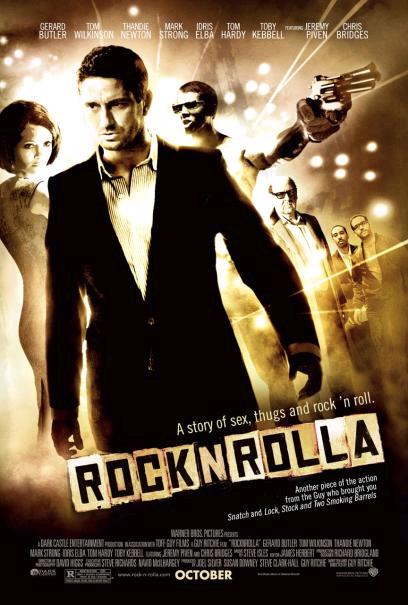 After the utterly disastrous double-whammy of Swept Away and Revolver (or triple-whammy if you count his failed marriage to a certain Pop Queen), you can hardly say you blame Guy Ritchie for slinking back to East End London with his tail between his legs. Both films were destroyed critically and commercially, and would have likely have sent most young helmers off for a lengthy stretch in Director Jail; lucky for him the doors of the last chance saloon opened, and it must have seemed a no-brainer on how to bounce back. By once again shining a light into the grimy corners on the Big Smoke and the shady geezers, gangsters and gormless gits that wheel and deal there, Ritchie doesn’t attempt anything with RocknRolla that he hasn’t already delivered in Lock, Stock or its superior follow-up Snatch, but still manages to produce what is probably his best film of the three. Yes, it’s just as convoluted – if not more – as its predecessors, but it moves at breakneck speed and has a perfect balance of brutal violence and great gags, gamely delivered by an absolutely superb cast. It’s also the most knockabout fun I’ve had with a film in a good while.

“Hello? This is King Leonidas and Stringer Bell. ASSES WILL BE KICKED.”

The film begins in typical Ritchie fashion, with the huge ensemble of characters being flashily introduced onscreen, accompanied by a gravelly-geez voiceover (Mark Strong as Archy, the film’s narrator). Throughout this opening, Archy describes some of the faces of the underworld that will populate the story, chiefly his boss, the local crime lord and real estate manipulator Lenny Cole (Tom Wilkinson), and how two-bit hoodlums One-Two (Gerard Butler) and Mumbles (Idris Elba) came to be in his pocket. Archy also explains the concept of a ‘RocknRolla’ to the uninitiated (IE. everybody besides Guy Ritchie), beginning the film with this fantastic sound bite:

“People ask the question… what’s a RocknRolla? And I tell ’em – it’s not about drugs, drums, and hospital drips, oh no. There’s more there than that, my friend. We all like a bit of the good life – some the money, some the drugs, others the sex game, the glamour, or the fame. But a RocknRolla, oh, he’s different. Why?

Because a real RocknRolla wants the fuckin’ lot.”

By the end of this sequence, it’s a safe bet that you’ll have decided whether or not you’re onboard with the film, especially if you’re familiar with Ritchie’s earlier work. It would be easy for anyone unconvinced by his previous forays into this territory to write this film off too, but what RocknRolla ultimately proves is that while the story tropes might be immediately familiar, it’s his ability to tell that story that’s the real reason to watch, and it’s better than it ever was.

Given its numerous plot threads and intersecting stories it’s difficult to go into the particulars of RocknRolla without spoilers; basically, the easiest way to break it down would be to say that if Ritchie builds his stories like a house of cards* then, as antiques were to Lock Stock and underground boxing was to Snatch, it’s property that is the ground layer that RocknRolla is built upon. When Russian billionaire Uri Omovich (a cheeky wink to ‘Abramovich’ there for Chelsea fans) plans a dodgy deal to secure a huge chunk of land he comes, inevitably, to the attention of Lenny Cole. While Lenny immediately starts planning to squeeze Uri for every rouble he can, he’s beaten to the theft by One-Two and Mumbles who, acting on the sly advice of Uri’s impossibly beautiful accountant (Thandie Newton), make off with the money with the intention of settling their debt to Lenny. It’s this chain of events that kicks the whole story wide open, and it rapidly expands to factor in stolen lucky paintings, corrupt counsellors,  the third member of One-Two and Mumble’s ‘Wild Bunch’, Handsome Bob (Tom Hardy) and a junkie rock star, Johnny Quid (Toby Kebbell), who is either dead or the key to everything.

The only man not laughing at those sunglasses

That actually makes the whole affair sound much more complex than it actually is. It’s complicated and intricate, sure, and the way that each character is connected does feel at times a little bit ‘Six Degrees of Cockney Bastards’, but Ritchie’s well-paced introduction and gradual adding of layers into the story keep it relatively easy to keep track of what’s going on and who is on whose side. Ultimately the film’s biggest failing is that its final reveal falls kind of flat, but even that doesn’t feel too forced, and there’s still a hell of lot to admire about how it gets there. Ritchie proves again that if there’s one thing he’s good at, it’s creating a fascinating snapshot of London’s seedy side – it’s as if he’s taking his sleeve and wiping away at the grubby windows of the underworld he creates, daring the viewer to resist having a peek.

The key filmatic elements of Ritchie’s work are all present and correct as he tells another of his tales of men with vague morals all chasing the same coin; every frame drips with undeniable style, the soundtrack is as achingly cool as ever, and his keen ear for the rat-a-tat poetry of Southern slang makes his dialogue more hilarious and quotable than ever before. But what really makes the whole thing work and truly worthy of a recommendation is the cast that he managed to assemble, and from top to tail, it’s undeniably brilliant. Tom Wilkinson, the experienced dramatic heavy-hitter, is particularly sublime, treading similar ground to the work done by Michael Gambon in 2004’s also-excellent Layer Cake, while Butler, Elba and Hardy do effortlessly charming work as the film’s trio of loveable rogues. Mark Strong shows why cinema is now taking particular notice of him, adding the sort of performance to his catalogue that would see him go on to take on key characters in both Kick-Ass and Sherlock Holmes, and Thandie Newton exudes the right amount of sexy and smart in her screen time to such a degree that you’ll wish you’d pursued a career in finance. But for me, Toby Kebbell – who’s been on my watchlist since his phenomenal debut in Shane Meadows’ Dead Man’s Shoes – just fucking tap-dances away with this thing. His portrayal of junkie superstar Johnny Quid, is at once troubled, tragic, menacing and, above all, absolutely hysterical, and it doesn’t surprise me one bit that Hollywood sat bolt upright and said “Where the hell did he come from?!” That he’s surrounded by so much talent and still comes away as the most talked about character is a true sign of not only his success here, but how far he can potentially go in the industry. I can’t wait to see what the future has in store for him. 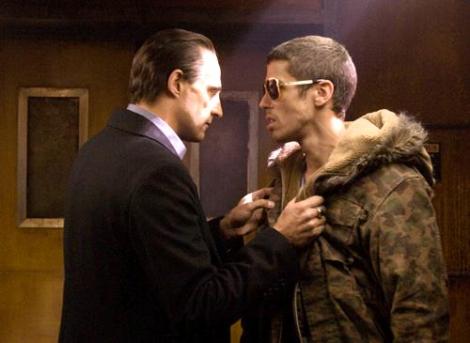 “Sunglasses not so funny now, eh?”

Did anybody complain when Scorsese returned to crime (and won an Oscar) for The Departed? Of course not, and while I’m hardly comparing him to Ritchie, my point is this: sometimes, you can do some of your best work when you’re doing it in a subject area that you know and love. By coming back to his roots, battle-scarred from mistakes learned the hard-way, Guy Ritchie made what is at once a return to form, his best to date, and his definitive love-letter to the cockney cads that fascinate him so much.

Bring on The Real RocknRolla.

This review was originally published on rustyshark.com